Imagine an explosion on the farside of the sun so powerful, we could feel it here on Earth. It happened on July 13th. The debris emerged in a circular cloud known as a 'halo CME':

Above: The July 13th CME imaged by SOHO coronagraphs

When space weather forecasters first saw this explosion, there was a moment of excitement. It appeared to be heading directly toward Earth. However, data from NASA's STEREO-A spacecraft indicated otherwise. The CME was heading directly away from us--a farside event.

Now for the interesting part: Although the explosion occured on the farside, separated from Earth by the massive body of the sun, it still peppered our planet with high-energy particles. The Energetic and Relativistic Nuclei and Electron (ERNE) detector onboard SOHO recorded a surge in radiation not long after the CME appeared: 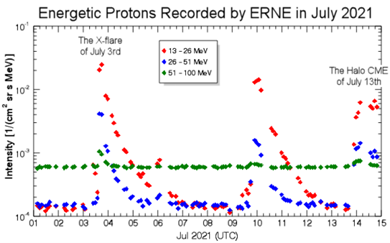 How did this radiation reach Earth? Rami Vainio, a professor of space physics at the University of Turku (Finland), who works with ERNE data says "it’s not possible to answer that question definitely without a detailed analysis involving multiple spacecraft." However, he speculates that the lift-off of the CME may have created a global shock wave on the farside of the sun. Particles spilling over the edge might have spiraled toward our planet.

Of particular interest are the green data points (51 to 100 MeV). These are the most energetic protons ERNE can detect. An uptick in green after the CME indicates unusually "hard" radiation---the kind accelerated in the leading edge of a fast-moving CME.

The source of the blast might have been the same sunspot (AR2838) that produced the first X-flare of Solar Cycle 25 on July 3rd. That sunspot is currently transiting the farside of the sun approximately where the CME came from. Within the next week AR2838 is expected to return--and then, maybe, the real fun begins. Stay tuned!