The termination event has arrived!

The termination event has arrived! 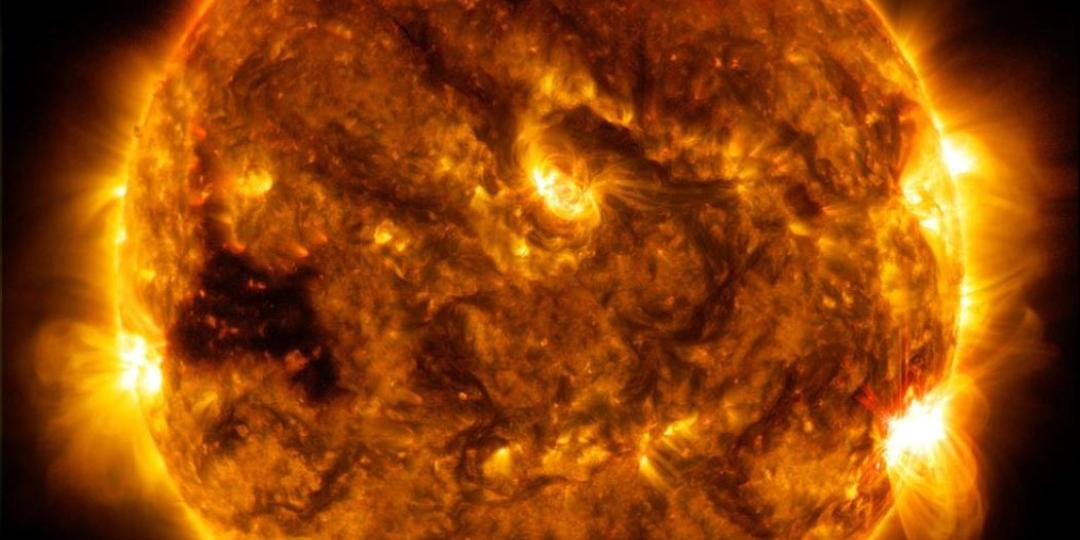 On 25 February 2022 something big has just happened on the sun. Solar physicists Scott McIntosh (NCAR) and Bob Leamon (U. Maryland-Baltimore) call it “The Termination Event.” “Old Solar Cycle 24 has finally died–it was terminated!” says McIntosh. “Now the new solar cycle, Solar Cycle 25, can really take off.” 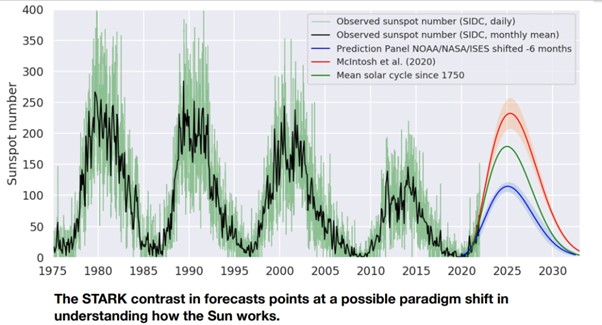 Predictions for Solar Cycle 25. Green would be average. Blue is the “official” prediction of a weak cycle. Red is a 2020 prediction based on the Termination Event.

The basic idea is this: Solar Cycle 25 (SC25) started in December 2019. However, old Solar Cycle 24 (SC24) refused to go away. It hung on for two more years, producing occasional old-cycle sunspots and clogging the sun’s upper layers with its decaying magnetic field.  During this time, the two cycles coexisted, SC25 struggling to break free while old SC24 held it back.

Researchers have long known that solar cycles can overlap. This is nothing new. The twist added by McIntosh and Leamon is that overlapping cycles can interact. It makes sense. In the early 20th century, George Ellery Hale discovered that the magnetic polarity of sunspot pairs reverses itself from one cycle to the next; indeed, the sun’s entire global magnetic field flips every ~11 years. When adjacent, opposite polarity solar cycles overlap, they naturally interfere.

Termination Events mark the end of the overlap period, when a new cycle can break free of the old. 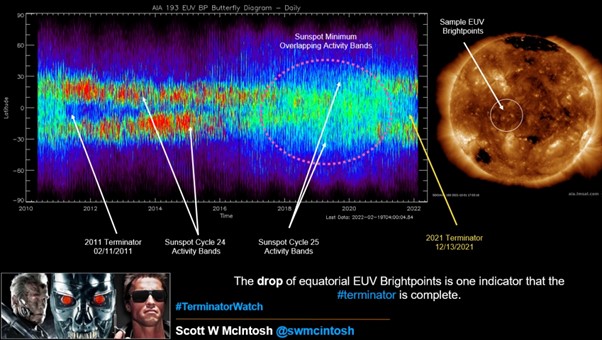 Moreover, the timing of the Termination Event can predict the intensity of the new cycle. In their Solar Physics paper, McIntosh and Leamon looked back over 270 years of sunspot data and found that Termination Events happen every 10 to 15 years.

So when did the latest Termination Event happen? December 2021, two years after Solar Cycle 25 began. This results in a specific testable prediction for Solar Cycle 25.

“We have finalised our forecast of SC25’s amplitude,” says McIntosh. “It will be just above the historical average with a monthly smoothed sunspot number of 190 ± 20.”

“Above average” may not sound exciting, but this is in fact a sharp departure from NOAA’s official forecast of a weak solar cycle. It could be just enough to catapult Terminators into the forefront of solar cycle prediction techniques.