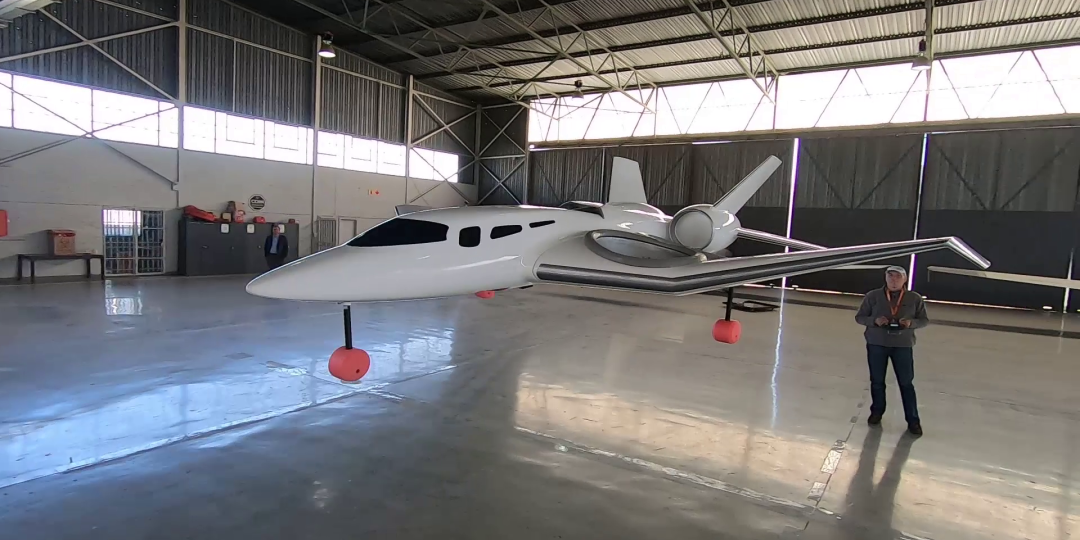 The Pegasus Vertical Business Jet (VBJ) being developed in South Africa is entering its next phase, with two quarter-scale models to be ready for testing and engineering by May 2021, and a full-scale unmanned hover model by the end of the year.

This follows the successful hover demonstration of a 1/8-scale model in July last year and the registration of patent rights in South Africa, Europe and the US.

The aircraft is set to revolutionise business travel globally and free travellers from the burden of the time-consuming drive to the airport.

The aircraft, that combines and enhances the characteristics of a helicopter with the luxury, range and speed of a business jet, has been hailed by the urban mobility project as the sixth most likely to succeed globally in a 2019 independent review by Abbott Aerospace. The review included 100 different projects, including some sponsored and supported by Boeing, Airbus and various governments around the world as well as venture capital companies with billions of dollars in funding.

“Most of these are of the air taxi type, therefore more compelling and exciting for us is that we were ranked first in the VTOL airplanes aimed at business jet type mission profile,” says Dr. Reza who first conceptualised the Pegasus VBJ.

Dr Reza, one of South Africa’s most renowned practitioners in the field of aesthetic medicine and an avid aeronautics scholar, was the founding CEO of Pegasus Universal Aerospace and now serves as chairman of the company.

He expects the aircraft to turn the market on its head for helicopters, business jets and short-range electronic vertical take-off and landing (eVTOL) craft.

Feasibility studies have valued the potential market at $2 trillion over twenty years.

With a wingspan of 14.8 m, the Pegasus VBJ can take off and land on any helipad, but thanks to its cool-air fan technology, it can also land on grass, wooden decks and even moving surfaces like a yacht, something that eVTOL craft cannot do.

This means the Pegasus VBJ can free busy executives from the time-consuming trip to the airport, even on long-range flights. It can also provide a solution for dense urban areas where space to build airports is limited.

The aircraft seats seven people, including the pilot, and has a range of 4400km from a runway take-off and 2124km from vertical take-off. Its endurance is 6.6 hours (runway) or 3.18 hours (VTOL).

The unique flight control system being developed by Callen Lenz in the UK will ensure enhanced safety and ease of flight from a pilot’s perspective.

Pegasus has partnered with Centurion-based aeronautical engineering company Epsilon Engineering Services in the further development of the aircraft.

The company is already working with AWS Amazon to develop a smart manufacturing facility with artificial intelligence and robotics.

In 2019 the Pegasus Universal Aerospace appointed Robbie Irons, who has extensive experience in business aviation with companies like ExecuJet and Bombardier, as CEO, and aviation heavyweight Andrew Dietrich has joined the company as chief pilot and head of flight operations.

The developers are currently raising funds with an offer of profit sharing for investors participating in its seven-year note. The minimum investment is R10 000. Dr Reza says the current fund raising is the third of its kind. While there is a total of R261 million’s worth of shares available, the immediate target is R30million – R40 million.

“We have more than delivered on the promises made at our previous fund raising. It is a big responsibility to work with other people’s money and we make sure that we stretch each rand as far as possible,” Dr Reza says.

Offers to become part of this unique project close in June. The prospectus and a full presentation are available at https://pegasusua.com/