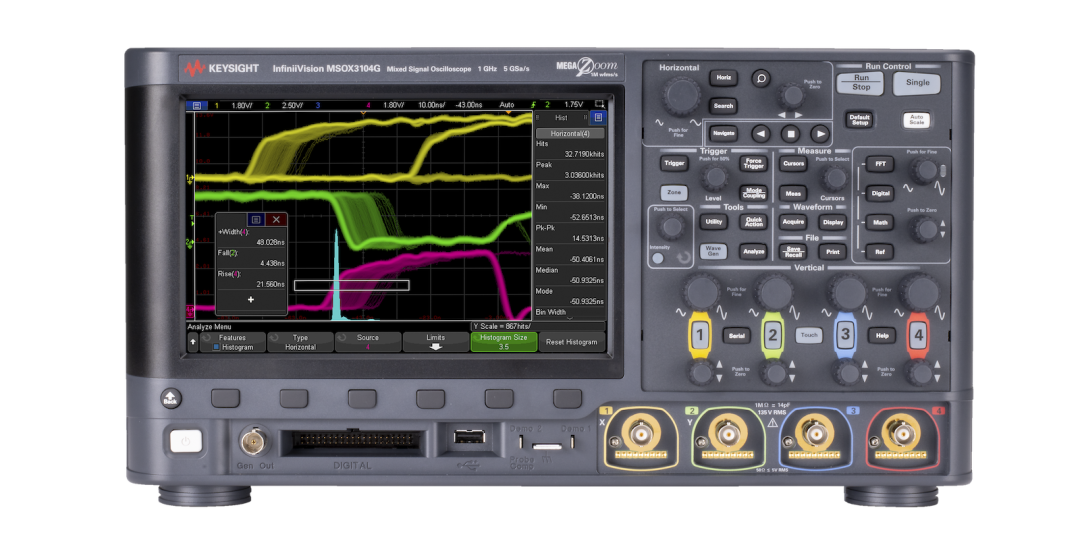 InfiniiVision X-Series oscilloscopes incorporate Keysight’s MegaZoom IV smart memory ASIC, which performs functions such as interpolations, logic channel plotting, serial bus decoding and measurements in hardware. This frees up the CPU to deliver an industry-leading update rate of over one million waveforms per second, uncompromised by other active functions. Design engineers gain sufficient signal detail to isolate elusive glitches and anomalies that other oscilloscopes in this class would be unable to catch.

The InfiniiVision 3000G X-Series has eight new features included as standard, including waveform and measurement histograms, mask limit testing, measurement limit testing, trigger and decode on five protocols, enhanced HDTV video analysis, and a LAN/VGA connectivity module. Test capability can thus be expanded for a fraction of the cost of adding each feature separately.

The basic oscilloscope can be specified with 100MHz, 200MHz, 350MHz, 500MHz or 1GHz bandwidth and two or four analogue input channels. In addition to serial protocol analysis functionality, the 3000G integrates up to five additional instrument capabilities. A mixed-signal oscilloscope (MSO) option offers 16 integrated digital channels, providing up to 20 channels of time-correlated acquisition and viewing on the same instrument.

Frequency response analysis (FRA) can be used to characterise the frequency response of designs including passive filters, amplifier circuits and switch-mode power supply negative feedback networks. An integrated 20MHz function and arbitrary waveform generator provides a stimulus output to the device under test, with a modulation feature supporting AM, FM and FSK sine, square and ramp modulations.

An integrated three-digit digital voltmeter operates through the same probes as the oscilloscope channels, but DVM measurements are made independently. An eight-digit counter and totaliser provides frequency measurements at a precision normally only associated with standalone counters.