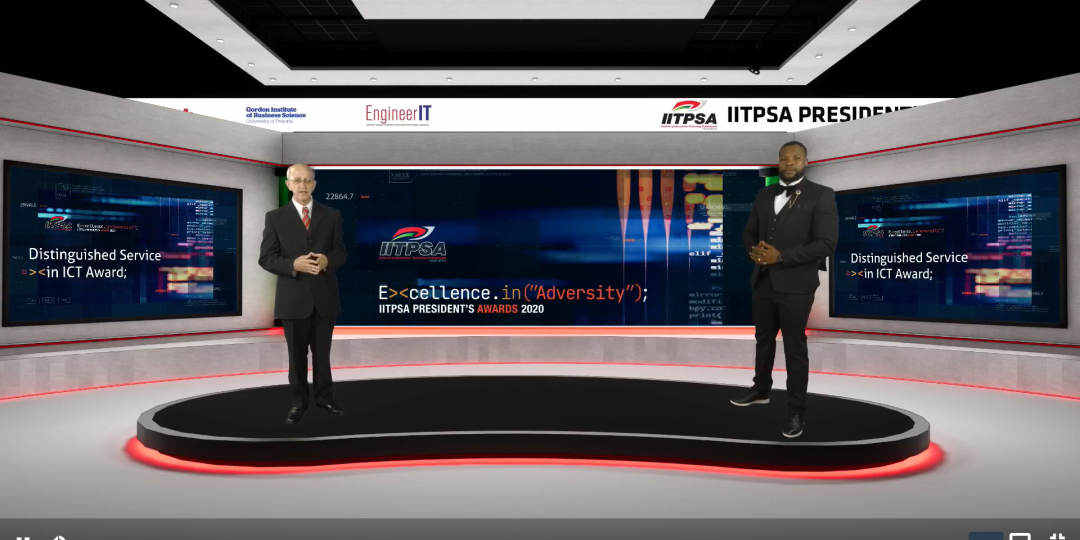 The IITPSA/ EngineerIT Distinguished Service in ICT 2020 award at a virtual IITPSA event held on 15 April 2021.   The 2020 award function was postponed last year and presented virtually for the first time.

Dr Stanley Mpofu, CIO of the University of the Witwatersrand, and Nomthi Nelwamondo, CIO of Assupol, were jointly recognised as 2020’s Visionary CIO of the Year for their professionalism and excellence, particularly during the challenges of 2020.

Ntuthuko Shezi, serial entrepreneur and innovator, and founder of livestock investment platform Livestock Wealth, was named IT Personality of the Year for 2020.

Girl Code, an NPO empowering young girls and women through technology, was named winner of the Social Responsibility/Community Award, and

Andre Jacobs, Chief of Product Engineering at IoT.nxt, was winner of the Technology Excellence Award.

EngineerIT congratulate all the award winners

Prof. Calitz is a long-standing member of IITPSA, having joined the then Computer Society on 17 May 1982. He is both a fellow and professional member of the institute.

He is a highly accomplished and respected academic and researcher, having published hundreds of peer reviewed articles and papers, and mentored and supervised dozens of post graduate students. He holds two doctoral degrees (Doctor of Philosophy and Doctor of Business Administration) and is Professor of Computer Science at the Nelson Mandela University in Port Elizabeth.

In February 2021, in recognition of his outstanding contribution, dedication and expertise in his field and the quality of his contributions in teaching and learning or academic engagement, he was one of five professors to be appointed as a “Distinguished Professor” at NMU.

Presenting the award, IITPSA Tony Parry, chief executive officer, said that Prof. Calitz had dedicated his career to progressing the ICT profession through his students and his research, and had contributed significantly both to the profession and to the work of the IITPSA over many years.

Parry said that the manner in which this awards event was staged encapsulated much of what everyone experienced during 2020. The year was unexpectedly challenging and forced everyone to change the way in which they lived and worked.

“Although we always enjoy face to face networking at our annual IITPSA gala awards event, there is a silver lining to having this one online. We are now able to welcome members and guests from across the country, and indeed, outside of the country and continent, with no price for admission, no limits on seating and at no risk to anyone. This is just one example of how the pandemic has forced a change in mindset and heralded the arrival of a new normal, both in 2020 and continuing into 2021. Unfortunately, we can’t give awards to everyone. However, our finalists for the 2020 President’s Awards are shining examples of what can be achieved through professional excellence, integrity and innovation. We congratulate every single one of our 2020 finalists, and our eventual award winners, and we thank you for your efforts to develop, deploy and apply information technology that makes a difference – even in the face of extreme adversity,” he concluded.