Fast and furious, a shock wave that extends for 6.5 million light years

Fast and furious, a shock wave that extends for 6.5 million light years 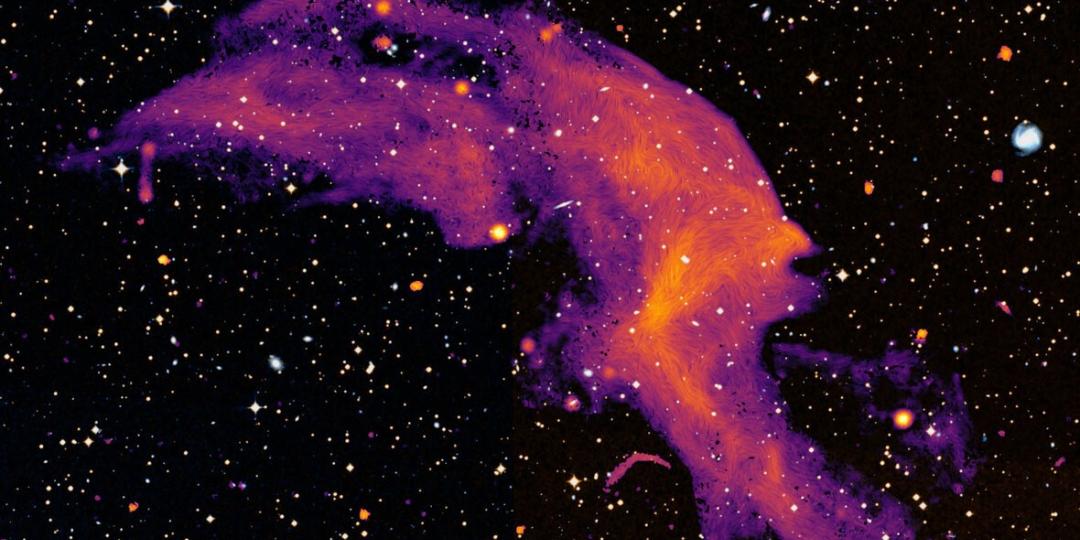 An international team of astronomers made the most detailed images of the largest cosmic shock wave visible from earth. These gigantic shock waves are much larger than our entire galaxy and they form when clusters of galaxies collide in what are the most energetic events after the Big Bang.

Our Universe is populated by galaxies that are not uniformly spread but concentrated in vast structures. The largest ones contain thousands of galaxies and are called "galaxy clusters". Sometimes, two galaxy clusters start attracting each other via the force of gravity leading to an inevitable collision. Collisions of galaxy clusters are the most powerful events that occur in our Universe since its formation, and they can generate spectacular “fireworks” that we can observe using modern radio telescopes. 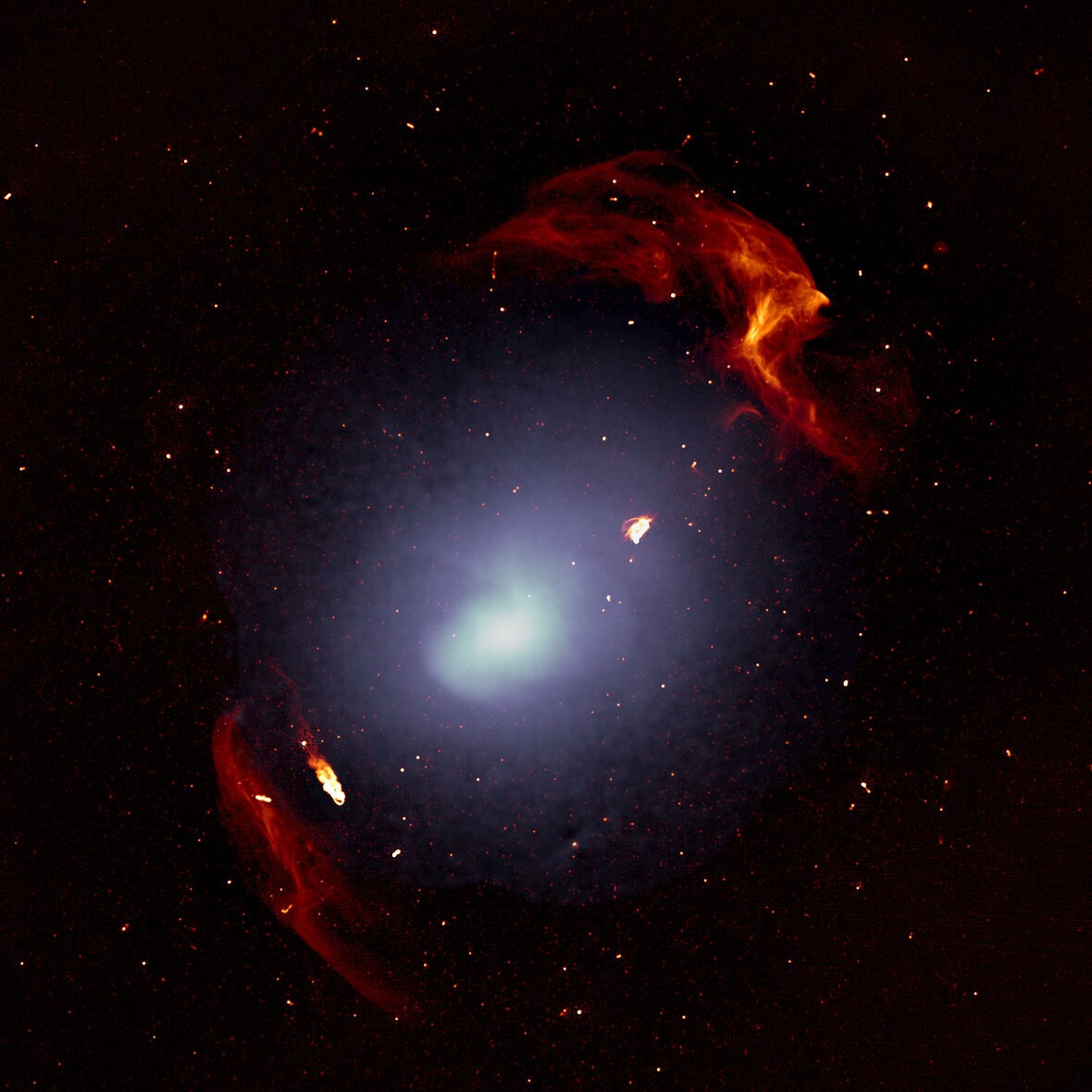 Individual galaxies are too small to be distinguished in this image. The white smooth colour shows the distribution of the gas that permeates the space within the galaxies of this galaxy cluster. The red structures trace the two big shock waves that were generated during the formation of the galaxy cluster. Image credit: Francesco de Gasperin, SARAO

When two galaxy clusters collide, we can witness the propagation of a pair of gigantic shock waves through the newly formed cluster, similar to the sonic booms from supersonic aircraft. An international team of astronomers made the most detailed study of such cosmic shock waves that were generated during the collision of two massive galaxy clusters more than a billion years ago, forming the galaxy cluster called Abell 3667. "These structures are full of surprises and much more complex than what we initially thought," says Prof. Francesco de Gasperin, (University of Hamburg and INAF) lead author of the study. "The shock waves act as giant particle accelerators that accelerate electrons to speeds close to the speed of light. When these fast electrons cross a magnetic field they emit the radio waves that we see. The shocks are threaded by an intricate pattern of bright filaments that trace the location of giant magnetic field lines and the regions where electrons are accelerated".

These shock waves are still propagating through the newly formed galaxy cluster at the very high speed of 1500 km/s, corresponding to a Mach number of 2.5. This means that the shock front would cross the entire Earth in the time needed to read this sentence. The size of the main shock wave is impressive, spanning the entire width of the galaxy cluster for a total size of 6.5 million light years. For comparison, the Milky Way, the galaxy we live in, is more than 60 times smaller than this shock wave. 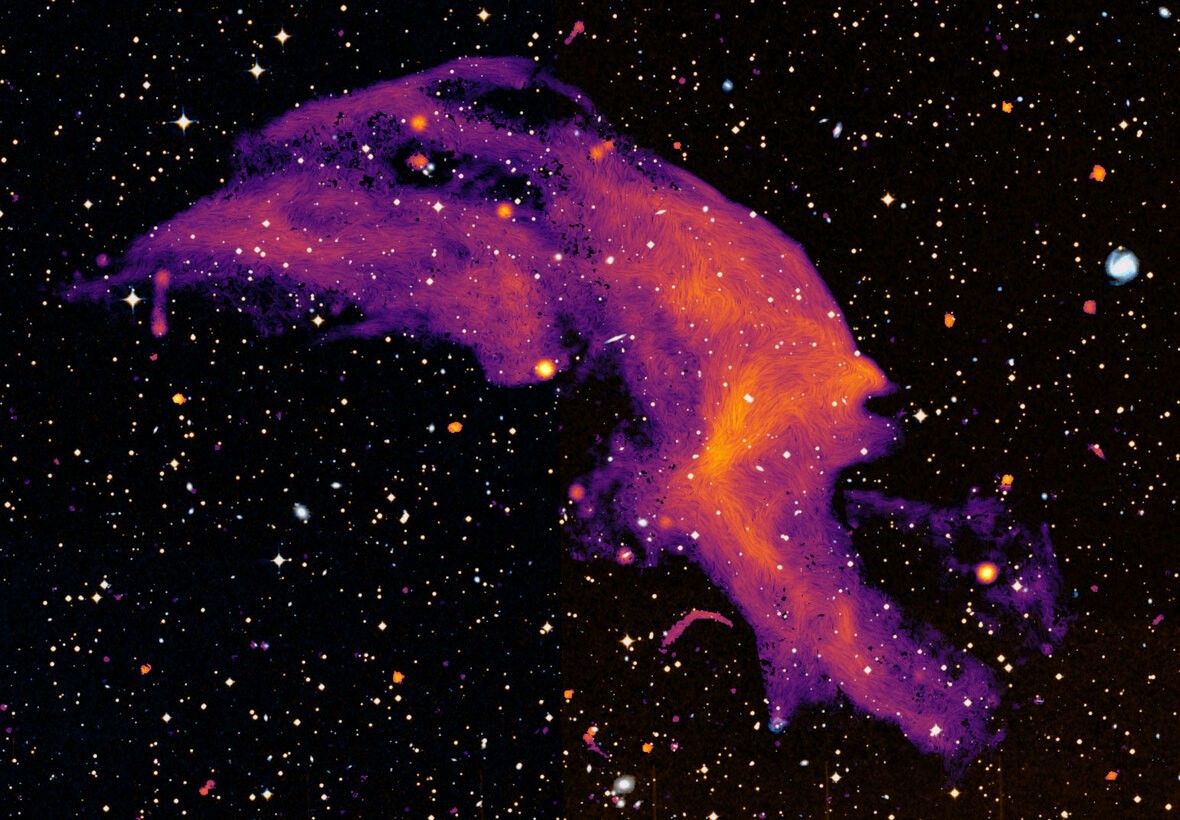 Above: A zoom-in on the largest of the two shock waves, where the complex filamentary structure is evident. Most of the visible galaxies are not part of the cluster, being either in the background or in front of it. The size of the Milky Way if it was at the same distance of the shock wave is also shown. Image credit: Francesco de Gasperin, SARAO

These unique observations were carried out using the novel MeerKAT radio telescope, located in South Africa. This telescope consists of 64 individual radio dishes that are 13.5 m in diameter and that are distributed over an area of 8 km. 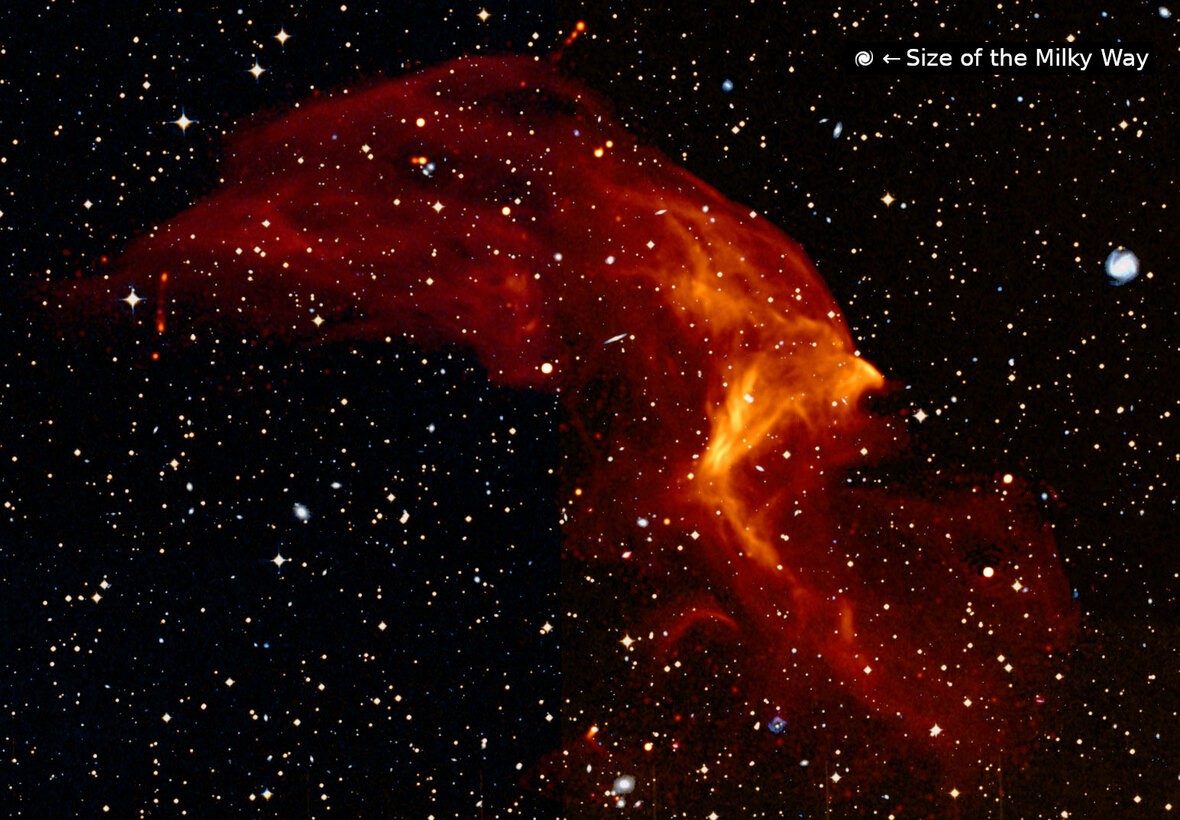 Above: A view of the orientation of the magnetic field lines across the cluster shock. Image credit: Francesco de Gasperin, SARAO

"The presence of the shocks in Abell 3667 is detected using sharp changes in the properties of the hot gas, traced by its X-ray emission," added Prof. Finoguenov at the University of Helsinki, who assisted the research by analysing the X-ray data, collected by the XMM-Newton observatory.