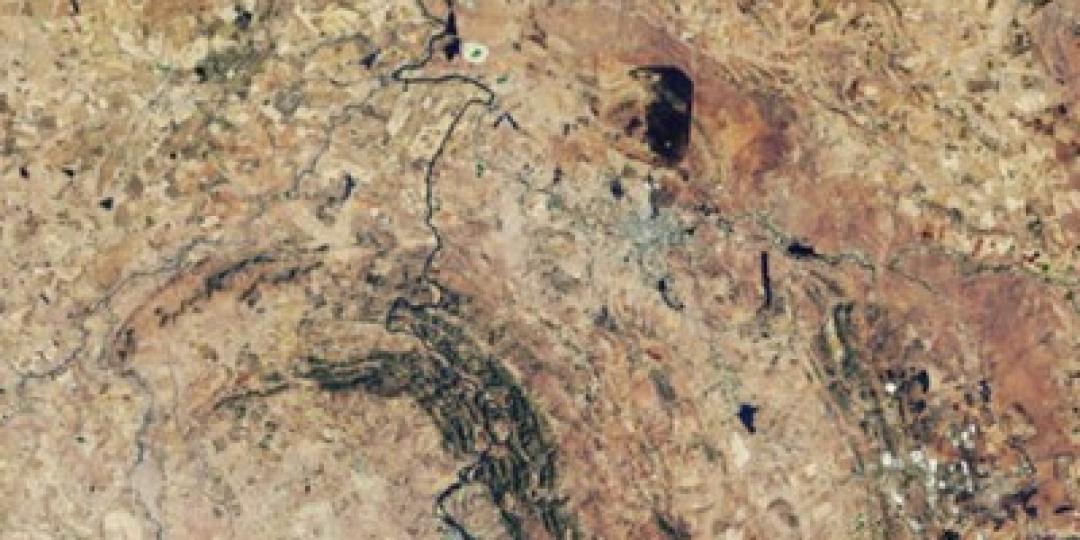 A meteorite impact is a colossal disruption—think intense ground shaking, sediments launching skyward, and enormous tsunamis. But evidence of all that mayhem can be erased by erosion over time. Scientists have now relied on clever geological sleuthing to discover impact ejecta near South Africa’s Vredefort impact structure, the site of a massive meteorite strike roughly 2 billion years ago. These ejecta might hold clues about the composition of the object that slammed into Earth during the Precambrian, the researchers suggest.

The Vredefort impact structure,  is estimated to be between 180 and 300 kilometres in diameter—it’s believed to be the largest impact structure on Earth. But it doesn’t look at all like a crater. It’s far too old, and therefore too eroded—to have preserved that characteristic signature of an impact.

What’s visible instead is an arc of uplifted sediments. That material is part of the “peak ring” that formed within the original crater. Such uplifted material is the calling card of a massive impact, said Matthew S. Huber, a geologist at the University of the Western Cape in Cape Town, South Africa. “If there’s a sufficiently large impact, there will be a rebound.”

Standing at the Roots

But even these uplifted sediments were buried far below Earth’s surface at the time of the impact, said Huber. “This area has experienced at least 10 kilometres of erosion. We’re at the deep structural roots.”

Because of all that erosion there’s no hope of finding impact ejecta sediments launched during an impact, which have often been altered by high temperatures and pressures within the impact structure itself, said Huber. “It’s all eroded away. It’s gone.”

However, nearby sites, located within a few radii of the Vredefort impact structure, might still contain impact ejecta, Huber and his colleagues reasoned. (In previous studies, Huber and his collaborators had found millimetre-sized Vredefort ejecta much farther afield, in Greenland and Russia.)

To search for this so-called proximal ejecta, Huber and his colleagues looked a few hundred kilometres to the west. They focused on a swath of the Kaapvaal Craton, a geologic feature that, like other cratons around the world, preserves particularly ancient sediments.

A violent event, told through Rocks

The researchers collected material from a pair of sediment cores originally drilled by mining companies exploring the region for iron and manganese. Huber and his collaborators honed in on sediments dated to be 1,9 billion to 2,2 billion years old and assembled several thin sections of the rocks to analyse. The sediments exhibited tell-tale signs of a violent event, the team found.

To begin with, the researchers noticed bull’s-eye-looking features up to a few centimetres in diameter. These structures,

called accretionary lapilli, form within clouds of ash. Much as hailstones grow via the addition of layers of ice, accretionary lapilli grow spherically as successive layers of ash are deposited on their outer surface. They’re associated with both volcanic eruptions and meteorite impacts.

“There’s no doubt that it is impact ejecta". Huber and his colleagues also spotted parallel lines running through grains of quartz. These lines, known as planar deformation features, represent broken atomic bonds in the quartz’s crystal lattice. Ordinary geologic processes like earthquakes or volcanic eruptions are rarely powerful enough to create these features, said Huber. “These grains were subjected to a shock wave.”

Planar deformation features are “unequivocal evidence” of impact material, said Elmar Buchner, a geologist at the Neu-Ulm University of Applied Sciences in Neu-Ulm, Germany, not involved in the research. “There’s no doubt that it is impact ejecta.”

These results were presented  at the recently held  84th Annual Meeting of the Meteoritical Society in Chicago.

There’s a lot more to learn from these ejecta, Huber and his collaborators suggest. The team next plans to analyse their samples for “impact melt,” material preserved from the time of the impact that’s sometimes a chemical amalgam of the impactor and the surrounding target rocks. Such ejecta could help reveal the composition of the object responsible for creating the Vredefort impact structure, the researchers suggest. “We are already planning our next analyses,” said Huber. “There is a lot of work to be done.”